The Chao Phraya is formed by the confluence of four rivers that originate in the mountainous far north of the country: the Ping (715 kilometres long); the Wang (400 kilometres); the Yom (700 kilometres); and the Nan (740 kilometres).

The river only gains its name, the Chao Phraya, at Nakhan Sawan at the confluence of the Ping and the Nan. At this location, one can clearly distinguish the difference between the two rivers. The Nan is reddish in colour, whereas the Ping is more of a green colour. From here, the Chao Phraya flows 365 kilometres south, where it empties into the sea on the northern tip of the Gulf of Thailand.

On this snaking course the river flows through Chai Nat, which is the site of a major government dam and irrigation scheme, and takes in Sing Buri, Ang Thong, Nonthaburi, Bangkok and on to the final destination of Samut Prakan, near to the Gulf. From its starting point at Nakhon Sawan, the river falls less than 24 metres during its journey to the sea and it forms the foundation of several important irrigation projects. 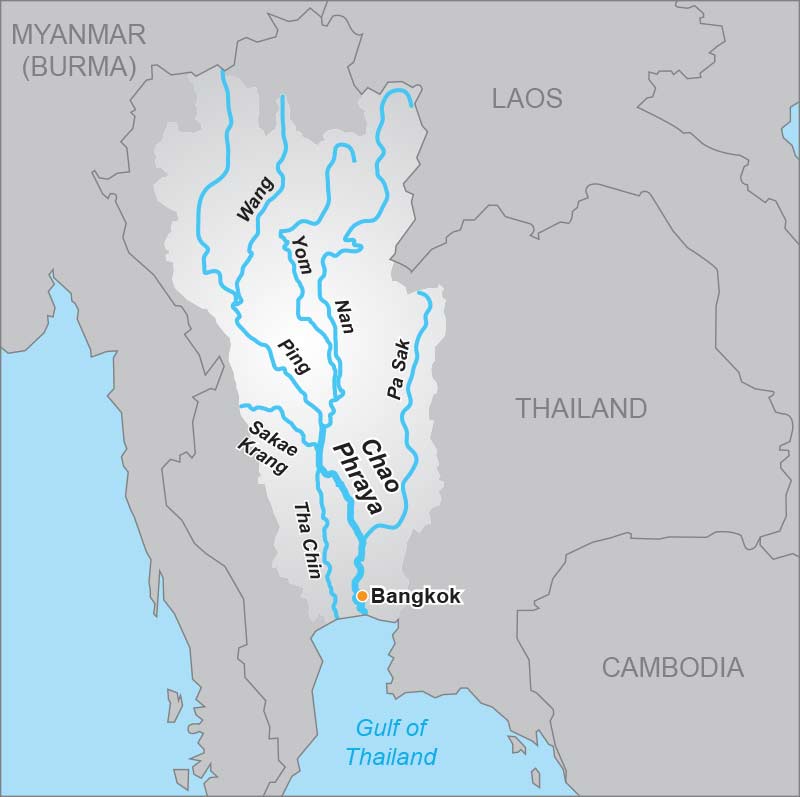 The tributaries and the Chao Phraya collectively form Thailand’s most important river system and drain 35 percent of the country’s land mass. About 20 million people – one in three of the population – live in the river’s basin, most of which is agricultural land with rice the leading yield. The delta plain around Bangkok is seldom over two metres above sea level and annual flooding brings rich alluvium to the rice fields.

The Chao Phraya has been a valuable waterway for the transportation of the country’s traditional exports of teak and rice south to Bangkok where it is shipped overseas. This economic factor also lead to the creation of important towns and cities alongside the river as it provided a means of transport, communication, defence, a source of water and food staples.

The Chao Phraya is tide-affected along a 180-kilometre stretch from the Gulf of Thailand to an area upriver of Ayutthaya at Ang Thong. The downriver monsoonal flow is met by bi-monthly peak tides pushing up from the Gulf and every two weeks, from mid-September to early November, the river is liable to bursting its banks and flooding.

As a former gateway to the world, the river has long been a conduit for overseas traders. Along its banks are numerous relics of this social economic history including foreign architecture, monuments and cemeteries built by the French, Japanese, Portuguese, British, Chinese and Dutch traders. Although the river’s importance as a trading route has waned with the advent of superior road and rail networks, it is still an important source of tourism revenue through hotels, tours and recreational activities.