Besides being a working river, a supply of employment for millions, a life source for agriculture, a major tourism draw, and the site of the capital city’s most important heritage, cultural and tourism attractions – the Chao Phraya River also provides a wealth of entertainment and leisure options.

One simple option is a leisurely walk around the different riverside districts. Phra Arthit Road is an area that stretches parallel to the Chao Phraya River from Phra Sumen Fort to Thammasat University. This thoroughfare is lined with quaint traditional shop-houses, bars and cafés with live music. The Pak Khlong Flower Market area is a blaze of colour and one of the most relaxing places to spend an early morning to view the exotic tropical fruits, flowers and vegetables. The Thewet area is home to a ramshackle yet photogenic traditional market and an area where people make merit by releasing fish or feeding bread to thousands of frenzied catfish that make the water surface bubble. The Oriental area is the old Western quarter and features European architecture and the esteemed Mandarin Oriental Hotel, the perfect place for afternoon tea.

For a more active pursuit, the riverside area offers multiple cycling options. Prominent among these is Bang Kachao which is popularly known as the “Lung of Bangkok”. This 3,089 sq-km wooded land area is situated in a bend in the mighty waterway and is sparsely populated with low-rise houses and temples and a rich diversity of native plants and animals. Bang Kachao offers a different experience to the hustle and bustle of the capital’s business districts.

A boat trip along the mighty waterway and the snaking canals on the Thonburi side is a pleasant way to spend an afternoon to explore the city once dubbed the “Venice of the East”. Options are as diverse as the landmarks alongside this important waterway; tourists can choose from a speedy afternoon exploration of the canals on a long-tailed speed boat; day trips to the ancient former capital of Ayutthaya; or even two and three night trips aboard converted wooden rice barges that accommodate up to 12 passengers in six private, air-conditioned cabins. 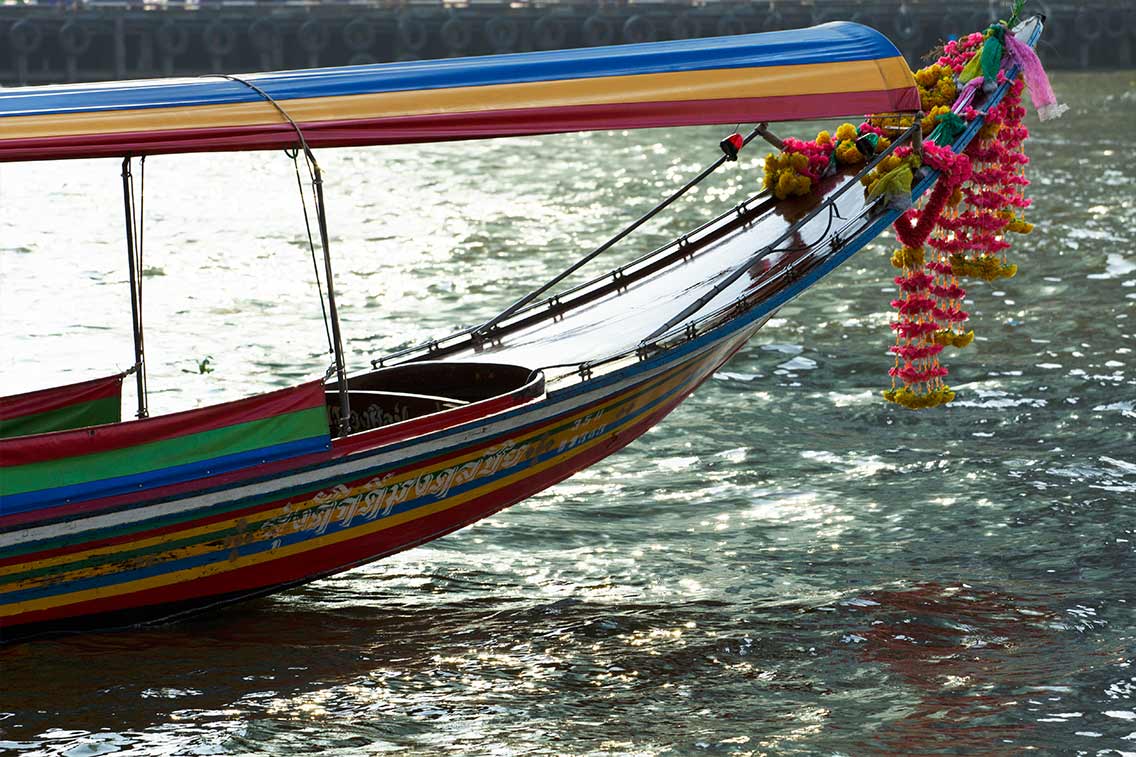 A trip down the canals that feed into the river is the best way to get a taste of Bangkok’s past before the skyscrapers and six-lane expressways were built. People who take the time to do this will be rewarded with views of quaint riverside communities that are a world away from the glitzy shopping malls and towering steel and glass office blocks of central Bangkok. A tour of the former ancient capital city of Ayutthaya offers history and heritage in the form of an abundance of UNESCO listed temples. A perfect day in this city can be enhanced with a sunset elephant ride as the shadows are cast over the spires of the temples and pagodas.

Another entertainment option is a food tour of the myriad of restaurants that line the riverside districts. An organised walking tour of the Bangrak area will give participants an insight into the wonderful and varied street stalls and neighbourhood restaurants that serve a wide diversity of Muslim-style curries, Chinese and Thai food. Like the cycle tours, guests can be accommodated on set itineraries, accompanied by a food expert, who will take participants to the best food outlets the area has to offer.

For culture and heritage, the riverside is home to a wealth of fascinating museums. One of the city’s hidden attractions is The Bangkokian Museum in the Bangrak area.

Sometimes referred to as the “Bangkok Folk Museum”, this attraction consists of two traditional wooden homes that have been preserved in perfect condition. It is set in a tiny street not far from River City retail complex and the famous Oriental Hotel. The museum stands in the rear end of a leafy garden, behind a large wooden gate. Stepping into this museum takes visitors back to a different era with teak furniture, original Bakelite switches, antique clocks and huge valve radios among the old world products on display.

M.R. Kukrit’s Heritage Home is a similar attraction situated a short distance from the river. This is the private residence of a former prime minister and it features five traditional teak homes on stilts containing a rich collection of artefacts, including antiques, ceramics, fine arts and rare books. An integral part of this property is the expanse of well-maintained tropical gardens and ponds surrounding the cluster of buildings. The beautiful gardens contain mature trees, exotic plants and fountains and lily ponds. 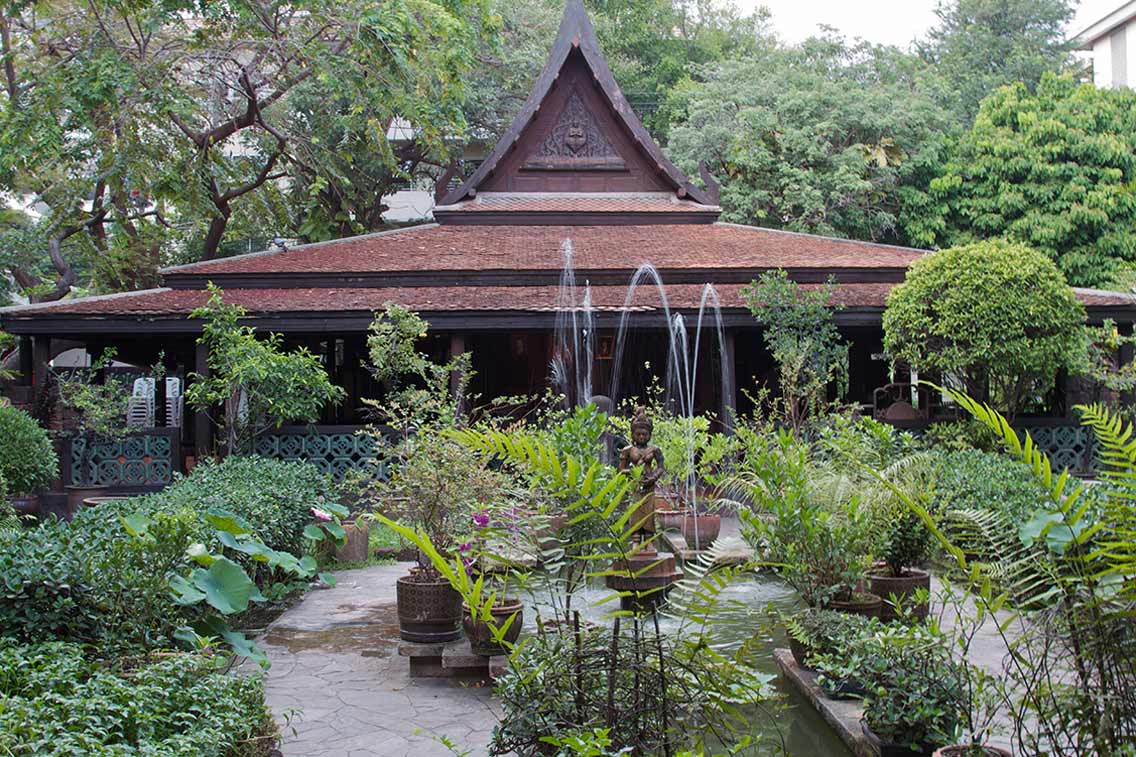 If your idea of a museum is a display of cultural artefacts, the Bangkok Forensic Museum may not be the perfect choice. However, for those interested in something more unusual and macabre this riverside attraction features six distinct museums within two separate buildings focusing on pathology and forensic science. On display are gruesome bodies of accident victims, murderers and even the preserved body of a famous madman who was convicted of eating victim’s internal organs. Definitely not one for the faint hearted, but probably a unique attraction in the world!

For a more cultured experience, the Royal Barges Museum offers an insight to a time when the Chao Phraya River and its tributaries formed the most important avenue of communication and transport. This renowned attraction is home to the stunning Royal Barges that are reserved for auspicious ceremonies and state occasions such as the very rare Royal Barge Procession. Each vessel is carved from huge pieces of teak with their prows carved into mythical creatures, gilded in gold, and intricately finished with shimmering pieces of glass. Rowed by up to 50 specially selected oarsmen, the boats leave their dry dock only on important state occasions for spectacular processions along the river. Therefore, this museum gives visitors a rare opportunity to view these beautiful boats up close.

A free but important attraction is the King Rama 1 monument located at the foot of Phra Phutta Yodfa Bridge (Memorial Bridge) on the Bangkok side of the river. Popularly known as King Puttayodfa, this double life-size monument to King Rama I was built to mark the capital’s 150th anniversary in 1932, along with the Puttayodfa Memorial Bridge next to which it sits. Born on March 20, 1736, King Rama I was the first king in the Chakri Dynasty which continues to this day.

For visitors keen on retail therapy, the Chao Phraya is also a superb shopping destination. Most prominent among these is Asiatique, the Riverfront. This expansive 80,000 sq-m site has been created around old warehouses that formerly belonged to the East Asiatic Company trading company. They are now an expansive entertainment and retail zone that pay homage to Bangkok’s past as an important 19th century riverside trading post. Visitors can browse 1,500 small shops. There are also many restaurants, bars and pubs. Entertainment options include the Joe Louis puppet Theatre, the Calypso Ladyboy show, the largest Ferris wheel in Thailand, a 4-D cinema and small spas where visitors can get a massage or a facial.

Wellness and spa treatments are also in abundance in all of the riverside hotels. The quest for good health through ancient meditation, massage and the use of natural herbal remedies is a renowned tradition in Thailand and the health centres in the luxury hotels provide the very best treatments. High-end facilities include hydrotherapy, whirlpool, cold plunge pools, saunas, steam rooms and outdoor pavilions for al fresco massages.

For a simple and free entertainment activity, a walk though the many parks that line the districts close to the river is a great option. Romaneenart Park is close to the Giant Swing and Wat Suthat. It is built on the site of the old city prison and one wall and some of the old guard towers form part of the park’s unique architectural features. Visitors will also be able to explore neo-classical buildings in the style of the King Rama V period.

Situated at the heart of Rattanakosin Island, Sanam Luang (the Royal Field) has been in existence since the beginning of Bangkok in 1782. The area was originally used for royal cremations up until the reign of King Rama III who decreed that all future cremations be held outside the old city walls. Surrounded by famous landmarks, such as the Grand Palace, the Temple of the Emerald Buddha, the National Museum and the National Gallery, Sanam Luang is a gathering ground for various activities throughout the year. 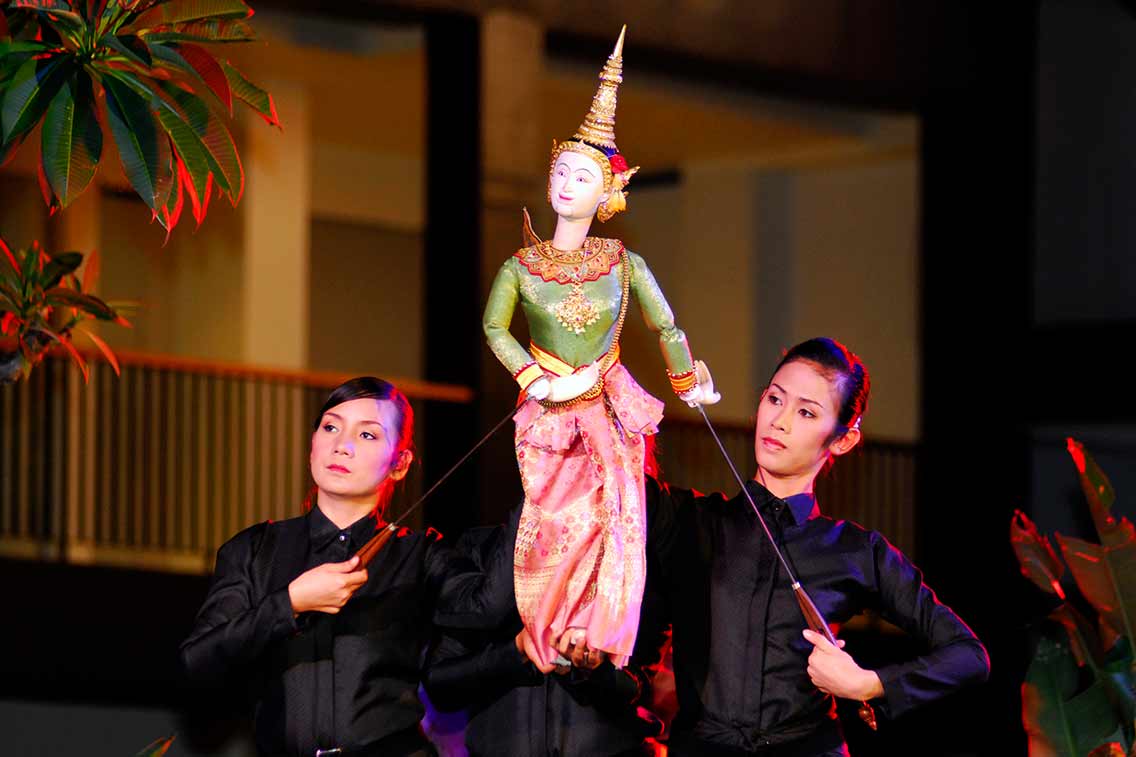 Close to trendy and bohemian Phra Artit Road, Santichaiprakan Park has been built around one of the few remaining structures of the old city fortifications. Situated on the riverside, the park is one of the few locations visitors can witness a Bangkok sunset.

Situated close to the Chao Phraya River is the Dusit Zoo. This is the only zoo in Bangkok and it is home to important facilities including an animal hospital, a zoo museum and an educational centre. Visitors can travel around the expansive 188,800 sq-m site on a sightseeing train. Animals including lions, tigers, monkeys, hippos, alligators, camels and kangaroos can be viewed. Other highlights include the African Savannah, an area where giraffes and zebras roam, the Reptile House, the Bird Aviary and the Elephant House.

Alternatively, take to the water for a buffet dinner cruise aboard a sleek modern cruiser. Another option is an à la carte dinner on a converted rice barge, enhanced by live traditional Thai music and traditional dance performances. Entertainment options abound on the river and within its confines, the only limit is time!